Results & Studies
Audience le mag
More than 3 in 4 French people own a smartphone and are increasingly using it to connect to the Internet.
Published on 16.12.2020 More than 3 in 4 French people own a smartphone and are increasingly using it to connect to the Internet. They spend more time on them, communicating and purchasing online. Mobile phones are therefore becoming essential and particularly effective in advertising campaigns, in addition to other media.

Every day, according to the Total Internet Audience measurement carried out by Médiamétrie//NetRatings, more than 1 in 3 Internet users (38.5%) connect to the Internet exclusively from their mobile phone. This represents 17.4 million people in France. This practice is even more marked on weekends than during the week, when Internet users are on their computers much less: on Saturdays and Sundays, 2 out of 5 people only use their smartphone to browse the Internet.

These uses are a continuation of the increasing role of the smartphone, which is now the first screen for accessing the Internet: every day, 6 in 10 French people connect to the Internet via their mobile phone, which represents 37.3 million people.

This role is explained firstly by the number of people who have smartphones: more than 3 in 4 French people (77%) own a smartphone, a proportion that is steadily increasing (76% one year ago). In total, 72% of French people connect to the internet every day, whatever the screen.

Internet users are also spending more and more time browsing on their smartphones: Médiamétrie reports a tripled daily connection time between 2017 and 2020. In April 2020, at the height of the first lockdown, time spent on the Internet was 3 hours per day, of which 62% was on mobile phones. In September 2020, French people spent 2 hours 17 minutes a day on the internet, 67% of which was on their mobile phones.

Smartphones play an even more vital role for young people. Nearly 7 in 10 young people between 15 and 24 years old connect exclusively via their mobile phones every day.  In September 2020, 88% of the surfing time of 15-24-year olds was on mobile phones. 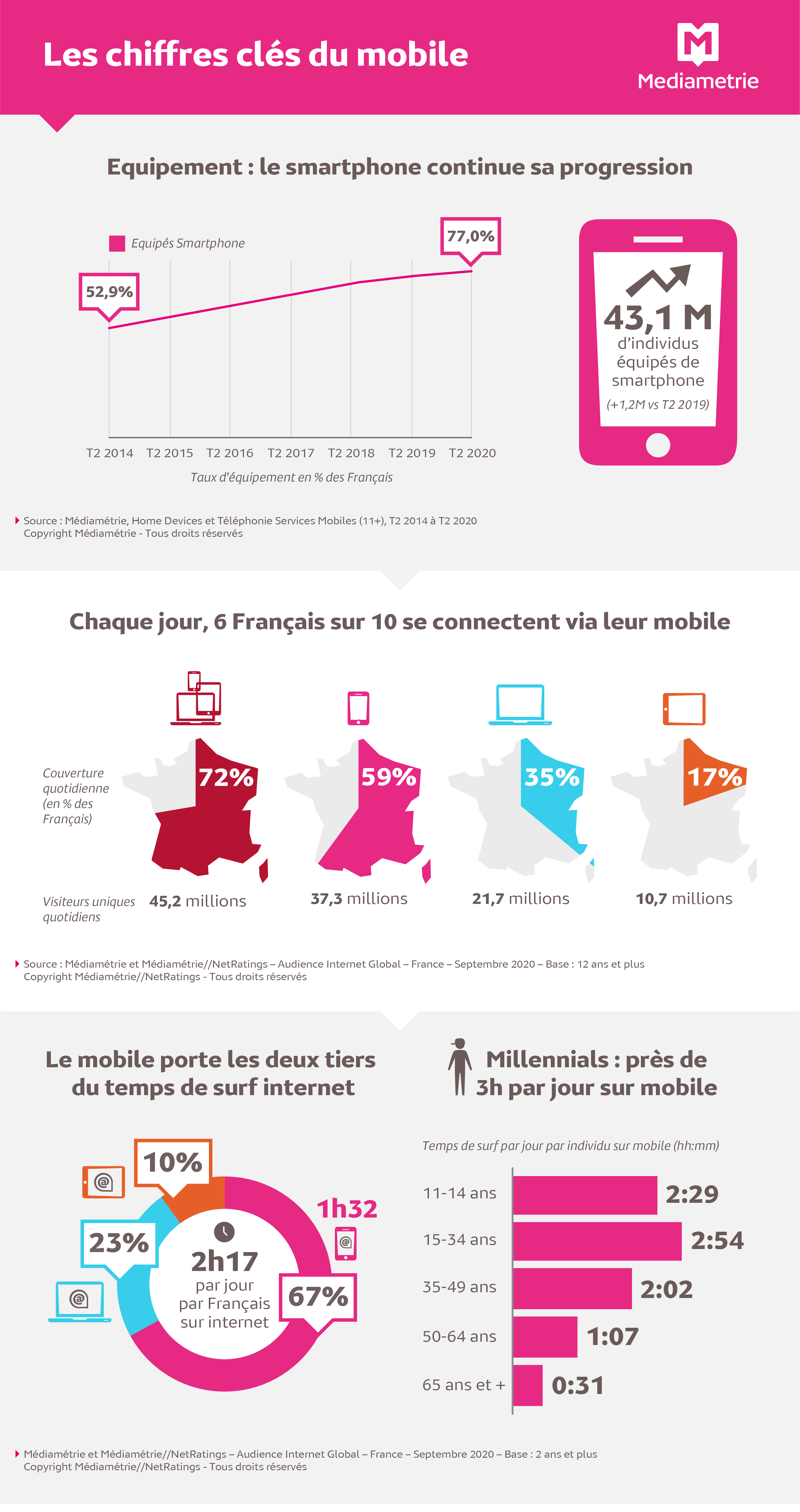 Internet users give smartphones a central place in exchanges and conversations. 29.9 million people connect to social media using smartphones every day. Messaging services (WhatsApp, etc.) are not left out, with 21.9 million unique daily mobile visitors, an increase of 72% in two years. Finally, 19 million Internet users check their emails on mobile phones, twice as many as on computers.

Smartphones are also becoming essential for e-commerce. They are the first screens for the top 15 merchant websites. Fashion and beauty products are ranked first: every day, 3 out of 4 Internet users visiting a website in this category do so from their mobile phones. 7 out of 10 for merchant websites, 64% on classifieds sites and hotel guides and 6 out of 10 for home and garden websites.

Olivia Brunet, Commercial Division Director at Médiamétrie//NetRatings, says “mobile phones represent the first point of contact between a consumer and a brand. It is growing stronger and a “mobile first” or even “mobile only” digital era is being confirmed by the conversion of traditionally more e-commerce categories. In September 2016, only 46.7% of daily Internet users visiting general merchant websites used mobile phones.”

People also look for jobs on smartphones: every day, 6 out of 10 Internet users browsing Employment and Career websites and applications use a mobile phone. 42.5% of the time spent in this category is spent on mobile phones.

Smartphones therefore occupy an increasingly important place in the digital advertising campaigns of brands: according to campaign reports carried out by Médiamétrie through its Digital Ad Ratings tool, mobile phones and tablets represent 62% of impressions served* for measured campaigns. For a campaign targeting women aged 13-34 years, 78% of mobile impressions are served on target (compared to 31% of computer impressions).

Furthermore, mobile phones complement other advertising channels, as shown by the cross-media study developed in partnership between Mobimétrie, the ACPM and Médiamétrie. Television and mobile therefore represent the best media mix to ensure good coverage: by combining TV and mobile in the same media plan, 94% of the population aged 15 years and over is reached, i.e. 47.9 million people.

87% of upper SPC individuals are reached by a plan that combines the daily press and mobile phones, as more and more upper SPC people are getting information exclusively on their mobile phones. More than 3/4 of press readings now take place on mobile phones.

The share of daily mobile exclusivity and its ability to target young people make it essential. It is also essential for mobility and geolocation.

*Impression served: number of times an advertising creation is fully downloaded to an Internet user's device.

Some questions for Valéry Rochard, Director of the Cross Media Department:

Cross Media is a study developed through a partnership between Mobimétrie, the ACPM and Médiamétrie, which measures the audience of brands and behaviours on all media types combined. The Cross Media solution consists of a merging of audience results from first-rate studies via a special “hub” survey. The merging involves bringing together the results of first-rate advertising studies for Mobimétrie, print and digital press for the ACPM and Médiamétrie's television, radio, internet and cinema results with data from the Hub.

The entire merging process is produced by Médiamétrie and its partners, and makes it possible to identify the consumption habits of published media

How are cross-media campaigns more effective and how does cross-media measurement help to create media plans?

The Cross Media study allows us to find out about the behaviour of the cross-media audience, allows the media to know their performance, all media combined, and allows advertisers and their advisors to have a strategic analysis and assessment tool focused on multi-media behaviours.

‘Mobivores’: do you know people who overconsume mobile Internet?