Results & Studies
Audience le mag
This year, the Winter Olympics are being held in PyeongChang, South Korea, from 9 to 25 February.
Published on 09.02.2018

Two weeks of competition dedicated to winter sports. In the lead up to this event, we look at the ratings of the previous Winter Games, which took place in Sochi, Russia, in 2014.

Two hundred and eighteen hours of airtime for the Sochi Games

Broadcast mainly on France 2 and France 3, the 2014 Winter Olympics were held in the Russian city of Sochi from 7 to 23 February. While the time difference between Russia and France was only 2 hours, there is an 8-hour difference with Korea. So for the 2018 Games, most of the events will be broadcast in France at night, in the morning and in the early afternoon. The men’s downhill, for example, will be broadcast on Sunday, 11 February at 3:00 am, and the women’s biathlon sprint on Saturday, 10 February at 12:15 pm.

Snowboarding and freestyle skiing were the two most broadcast disciplines in these Olympics. They were also the ones to have changed the most since the Vancouver Games, having each gained four additional events. Behind them in terms of broadcasting hours was figure skating, ice hockey and Alpine skiing.

The 2014 Winter Olympics achieved a 20-year audience record: an average of 3.8 million viewers watched the events broadcast during prime-time access on France 2 over the 2 weeks of the competition (6:30 pm to 8:00 pm). On average, almost 1 in 5 viewers during prime-time access – 19.3% of the audience share – watched the events. Vancouver 2010 drew in an average of 3.1 million viewers for the events broadcast during access time on France 2. The previous record dated back to the Salt Lake City Games in 2002, with 3.4 million.

France 2 and France 3 therefore saw a significant increase in their audience share during the Games, their respective percentages rising by 2.5 and 1.3 points.

The Sochi Olympic Games were extremely unifying for the television-viewing public: 43.4 million French citizens, i.e. almost 3/4 (73.3%) of individuals aged 4 and over, watched them for at least 5 consecutive minutes. Only the London 2012 Olympic Games had higher ratings (46.3 million). By way of comparison, the 2014 Football World Cup was seen by 50 million people, and Euro 2016 by 48 million. 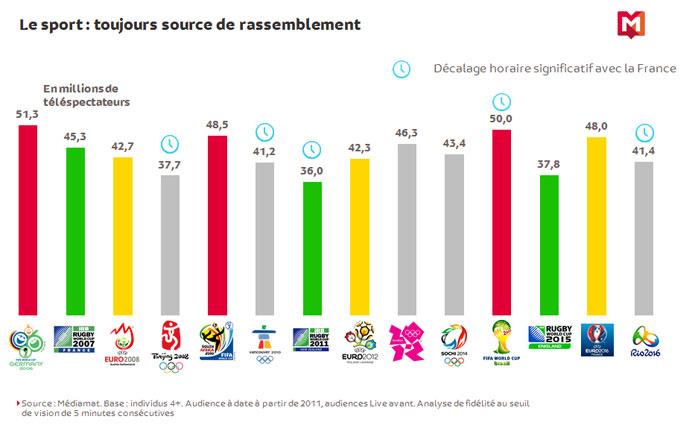 Highlights of the event

A key moment in every Olympic Games, the opening ceremony drew in 5.5 million TV viewers on 7 February 2014 between 4:30 pm and 8:00 pm; it was watched by more than 1 in 3 viewers (35.3% of the audience share). France 2 reached its peak audience during the Olympic fortnight when athletes Vladislav Tretiak and Irina Rodnina lit the Olympic flame: 9 million viewers watched them make this symbolic gesture at 7:54 pm, that’s around 2 in 5 (37.5% of the audience share). In 2018, the ceremony takes place at 12:00 pm on Friday 9 February.

The Sochi Olympic Games attracted high numbers of female viewers: women made up almost half of the competition’s audience, the highest figure for a major sporting event. This phenomenon was also observed at the 2008 Beijing Olympic Games, Vancouver 2010 and London 2012.

However, the Olympic Games audience is younger and more male-dominated than the overall France 2 and France 3 audience during the same period. The event attracted more working people, in particular upper SPC individuals. These are the biggest fans of broadcasts of the competition.

A facility enhanced by online broadcasts

On the Internet, the facility for watching live broadcasts on the francetvsport website offered several viewing modes, including the option of watching 4 events at the same time, with a split screen. This offer increased the number of people watching the competition online: in total, there were more than 6.5 million live sessions for the Olympic Games (from 6 to 23/02), that’s an average number of sessions which is 28% higher than the average for February.

The public also watched the events in catch-up mode on the Internet: this viewing mode represented 15% of total consumption on the Internet, a larger proportion than on television screens, for which the vast majority of viewing is live. Live viewing is in fact key in producing the adrenaline rush associated with sporting events.

Internet and television therefore complemented each other when it came to watching the competition. On weekdays, considering the times at which the Games were broadcast (during the daytime), live consumption on the Internet was high, with more than 420,000 sessions per day on average. At weekends, the public preferred television over the Internet, but Internet viewing nevertheless remained high (240,000 sessions on average). 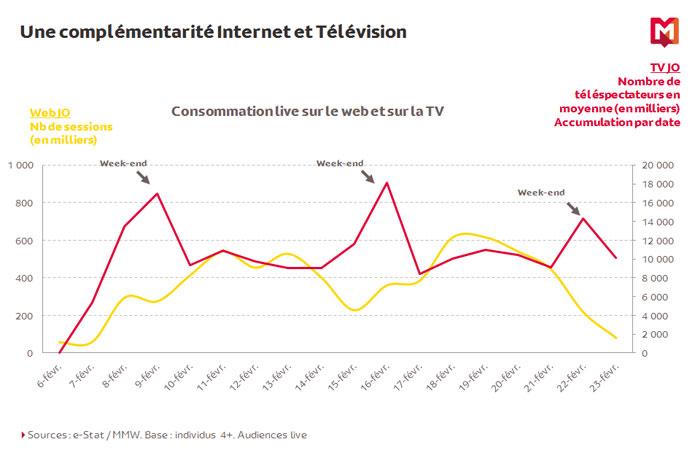 Despite the differences between the two Winter Games and in particular the larger time difference in the 2018 Games, there are likely to be similarities: popularity of the opening ceremony, top events, enthusiasm for national champions, etc., and in addition, TV/Internet complementarity, which continues to grow. Come back in a few weeks to check the audience numbers for these Games, and the 4-screen TV results in particular, which are sure to be enlightening.

Elsewhere in the world...

Audiences garnered outside of France, studied by Eurodata TV Worldwide, reveal comparable trends. The opening ceremony was watched by large swathes of the global population, especially in Japan : despite being broadcast at 1:00am, the ceremony attracted an average of 2.5 million viewers. In the United States, where it was broadcast at prime time, it was watched by 31.7 million peple.

The events which garnered the highest ratings in the world confirm the public's passion for national heroes, a key factor for audiences of sports programmes.

In Austria, the men's downhill skiing, which took place on 9 February at 8:00am, drew in 79.6% of the audience share and 1.2 million viewers. Note that it was the Austrian Matthias Mayer who won.

In Norway, the men's cross-country relay (Sunday, 16 February at 11:00am) attracted 89.4% of the audience share and 1.6 million viewers. On the podium : Sweden, Russia and France.

In Russia, the last part of the ice hockey match between Russia and the United States (Saturday, 15 February at 3:00pm) : 43.3% of the audience share and 10.5 million viewers.