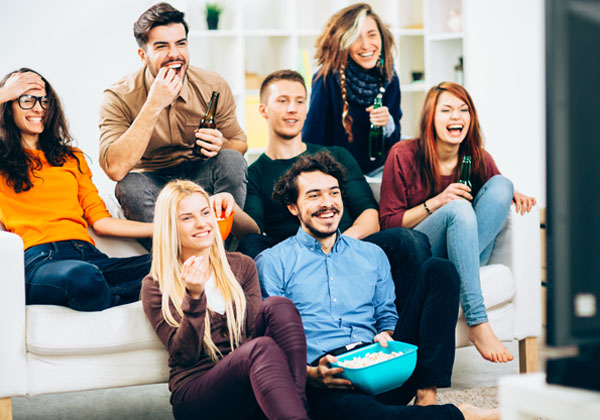 From 7 June through 7 July 2019, the Women’s World Cup took place across 9 cities in France with record-breaking TV audiences! This success is part of the increasing popularity and exposure of women’s football on TV over the past ten years.

The Women’s World Cup, which recently concluded, saw the clash of 24 teams in 52 matches. TF1, TMC, broadcasted some of the games while Canal + showed the entire competition. This was a winning bet for these channels since this edition drew in the highest audience numbers ever recorded for women’s football: an average of 3.5 million viewers watched the Women’s World Cup 2019 in unscrambled broadcast (on TF1 and TMC). This is a spectacular increase in comparison to the previous Women’s World Cup in Canada in 2015, which had an average of 744,000 viewers and as was the case in 2019, the French team was eliminated during the quarter-finals. Matches were broadcast in France at the end of the day and in the evening on W9 (access or night-time), broadcast times that are rather favorable. Euro 2017, which took place in the Netherlands, had attracted an average of 1.1 million viewers for access -and prime-time matches on France 2, France 3 and France 4. A year after the victory of the Men’s World Cup, the public’s interest in women’s football is on the rise, especially since France hosted the competition, and media coverage was intense. For Julien Rosanvallon, Digital and TV Director at Médiamétrie, “TV channels bank on the public’s growing interest by providing more exposure for this competition than in previous years. The success again confirms the strength of live broadcasts and the capacity of major sports events to mobilize large groups of people in front of the television set.”

A total of 35.6 million viewers watched at least five minutes of the competition on TF1, TMC and Canal + this year. Impressive numbers despite being less than for the Men’s World Cup in 2018 (51.5 million viewers); but, we must keep in mind that the men won the Cup, whereas the women’s team was defeated in the quartier-finals.

The proportion of women viewers was particularly high: 41.2% of the audience was women. They only accounted for 30% in 2015 and 32.2% in 2017, and represented 40.7% in 2018 for the Men’s World Cup. The unprecedented media coverage of the event and the personality of certain players certainly contributed to mobilizing the female audience. However, women’s football is also becoming more and more attractive to men.

There were 11.8 million viewers on TF1 and Canal+ for the quarter-finals on Friday, 28 June when the Bleues were eliminated by the USA. On that day, TF1 had the best audience for 2019 of all the channels and all the programmes: a total of 10.7 million television viewers (49.6% of the audience share). This was also a record for the French team during the Women’s World Cup. The channel recorded a peak at 12.2 million TV viewers during the match. On Canal+, 1.1 million viewers followed the match with a peak of 1.2 million viewers at around 10.45 pm during the second half-time.

Despite the impact of the Bleues’ elimination, the 2019 Cup continued to attract viewers: On Tuesday, 2 July, 6.3 million people watched the England-USA match on TF1 and Canal+. That is 30% of audience share. On Wednesday, 3 July, the semi-final between the Netherlands and Sweden attracted 4.9 million viewers on Canal+ and TF1. As for the final, there were 6 million viewers (46.2% AS) at 5 pm on Sunday, 7 July. These audiences rank higher than average audiences for this time slot.

The success of women’s football with audiences is not limited to France. Naturally, national teams attracted the most viewers. In the United Kingdom, the semi-final, which the national team lost against the American team on July 2, attracted 10.3 million viewers, with a peak at 11.7 million. In Sweden, 2.3 million people watched their team go down against the Netherlands during the semi-final and this represented 72.7% of the prime-time audience share for TV4. In Germany, the quarter-final Germany-Sweden drew an audience of 7.9 million and an audience share of 43% on ARD. Also in Germany, the final match attracted 5.1 million viewers for an audience share of 27.8%. In the Netherlands, 5.5 million fans watched the final match; that is 87.2% of the audience share for NPO1. According to François Gendrot, International Research Manager at Eurodata TV Worldwide, “in the Netherlands, where the country made it to the finals, the audience for the final match was the highest TV audience since the semi-final of the 2014 Men’s World Cup against Argentina, and an absolute record for a women’s sports event”. In the United States, the winning country, the final against the Netherlands was broadcast on two channels a little after 10.30 am: it attracted almost 14 million viewers on Fox (26.7% of the audience share) and almost 1.3 million on Telemundo (2.5% of the audience share). These results do not include the audiences that watched the match in rebroadcast in 7 days, the Nielsen reference measurement in the United States.

The game and the emotions driven by the sport continue to mobilize the television public, and the growing popularity of women’s football observed year after year is one of the recent aspects, with talented female athletes who embody the values of the sport for both girls and boys! This is a great audience that heralds a great future!

Médiamat, the benchmark in television audience measurement in France

Exclusive Insights on 2020 Super Bowl, Lakers' Tribute to Kobe and US Top 200 Sports Broadcast of 2019