Audiences: On the occasion of the Euros, we look back on a year of television measurement outside the home and on the move

Results & Studies
Audience le mag
The number of people watching television out of home significantly increased when France was playing in the Euros.
Published on 01.07.2021 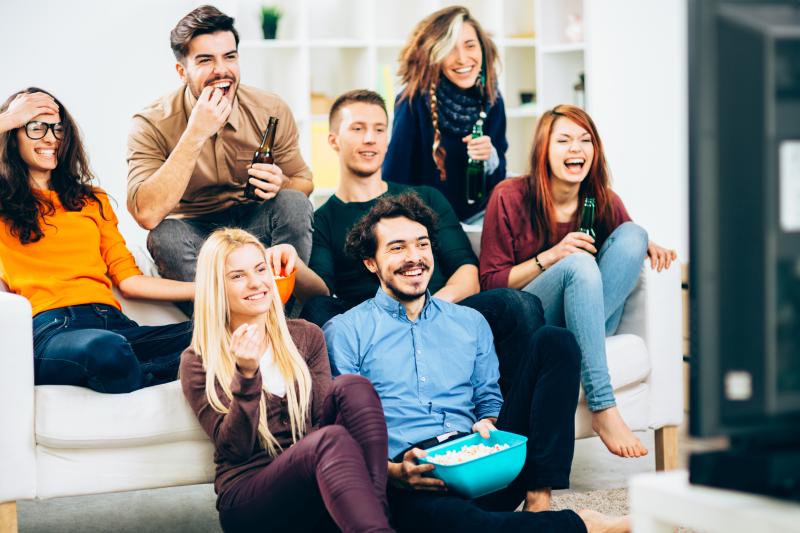 The number of people watching television out of home significantly increased when France was playing in the Euros. Médiamétrie has been measuring the television audience watching away from home, whether at friends’ homes, public places, second homes and work and regardless of the screen used, since the 30th of March 2020. The audience measurement thus better represents new TV practices and demonstrates the significant contribution that out-of-home viewing makes to the global audience, particularly among young people. This new measurement – which won first prize at the “2021 Research & Innovation” Awards – is the result of the innovative methodology and technology developed by Médiamétrie.

The ongoing UEFA European Football Championship is the perfect occasion to study, over a year after it was launched and in an almost normal context, the contribution of out-of-home (OOH) TV viewing to the audience of a sporting event. The four matches that the French team played in showed a significant contribution to the audience watching away from home. On average, 1.9 million viewers watched the matches outside of their home or while on the move, equal to around 14% of the total audience. Watching television outside of the home is most common among 15–34-year-olds and they account for almost a quarter of the audience (23%).

The measurement of out-of-home TV audiences began at the end of March 2020, when France was put into lockdown for the first time. However, Médiamétrie maintained its schedule in accordance with its commitments with regards to the industry.

In July and August 2020, the individual OOH TV viewing time was 22 minutes on average, a 10% contribution to home viewing. 9.5 million people watched television away from homes, i.e. 19% of those aged 15 and over equipped with a television. In 2021, with the summer of sport ahead – the UEFA European Football Championship and the Olympic Games – OOH TV viewing is expected to be very high in July and August.

Laurence Deléchapt, Director of Médiamétrie TV department, pointed out: “Our studies show that the practice of out-of-home television viewing changes with the seasons and increases during the school holidays in particular. In addition, the fact that many sporting events have restarted has also contributed to the increase of out-of-home viewing.”

In July and August 2020, Médiamétrie measured 5.7 million viewers that watched television exclusively away from home, out of the total 9.5 million out-of-home viewers.

Laurence Deléchapt analysed: “The out-of-home television measurement allows us to capture occasional viewers who only watch the television away from home (second homes, holiday destinations, bars, restaurants, workplaces...) on the television or on other digital screens”.

In general, viewers watch the same programmes when on the move and at home. However, OOH viewers tend to prefer children/young people’s and sporting programmes. Sporting programmes – which are almost always watched live – are particularly suitable for OOH viewing.

The OOH television measurement is the latest evolution of Médiamat, the television audience measurement carried out by Médiamétrie since 1989. Since the 31st of March 2020, each morning all television channels receive the total audience that has watched their programmes both out-of-home and on the move: in second homes, hotels, holiday rentals, bars, stations, airports, public places, cars, trains, buses, at parents’ and friends’ homes...The audience is measured on all screens – television, computers, smartphones, tablets – and regardless of whether the programme is watched live or on demand. Médiamétrie recently won the Gold Trophy in the Media Audience category for its OOH TV audience measurement system, at the “2021 Research & Innovation” Awards organised by Offremedia.

Laurence Deléchapt highlighted: “Since we integrated the out-of-home TV measurement into Médiamat, our audience measurement now covers an even wider scope. It is also much more representative of television viewing in France, particularly among young people who are the biggest consumers of television away from home”.

The television audience measurement relies on two complementary panels. The Médiamat panel measures the audience watching the television at home. All active television sets in the home are taken into account and all people living in the home and over the age of 4 are counted. Viewers, and any possible guests, declare their presence in front of the television with a remote control.

A second panel measures the OOH audience thanks to an innovative Personal Portable Audience Measurement (PPAM). The panellists are equipped with a small box – a miniature audience meter the size of a watch developed by Médiamétrie – that accompanies them in their daily activities. This panel is made up of 4,500 people aged 15 and over that are equipped with a television.

The audience meter records the audience automatically thanks to the watermarking technology used. This technology is identical to that used for measuring the television audience at home. The microphone in the device records all the TV programmes watched.

A robust method for integrating audiences on a daily basis

To obtain the television audience regardless of the viewing location, a statistical merging method is used. It combines the television viewing measured at home with that recorded away from home by the panel wearing an audience meter. An algorithm allows Médiamétrie to associate a portable meter panellist with a Médiamat panellist – according to socio-demographic proximity and TV consumption criteria – and thus identify them as a OOH viewer.

This operation is done every day. The OOH audience ratings for guests already measured in the Médiamat is replaced by that of the portable meter panellists to avoid counting anything in double.

For Lorie Dudoignon, Director of Médiamétrie’s Statistics Department, “The challenge for this measurement was to come up with a robust, high-quality and fast method that would allow us to integrate the OOH audiences into the Médiamat ratings sent to clients each day.”

The methodology was submitted to the CESP (Centre d’Etudes des Supports de Publicité) who judged the approach to be well thought-out and the results to be consistent.

Laurence Deléchapt laid out the roadmap for the coming months: “This evolution of the benchmark measurement for the television is the first step in a daily television audience measurement in all locations and on all screens. Our aim is to supplement the measurement by taking into account the television watched online at home.”

Until then, the 4-screen television audience measurement is still relevant and will continue to be carried out alongside the Médiamat but will not be integrated into the reference measurement.

[i] Cumulative extrapolated rate, i.e. the total number of viewers who watched the programme for at least 10 consecutive seconds.

Exclusive insights on how sports can boost linear TV audiences