Cinema: audience emotions under the spotlight 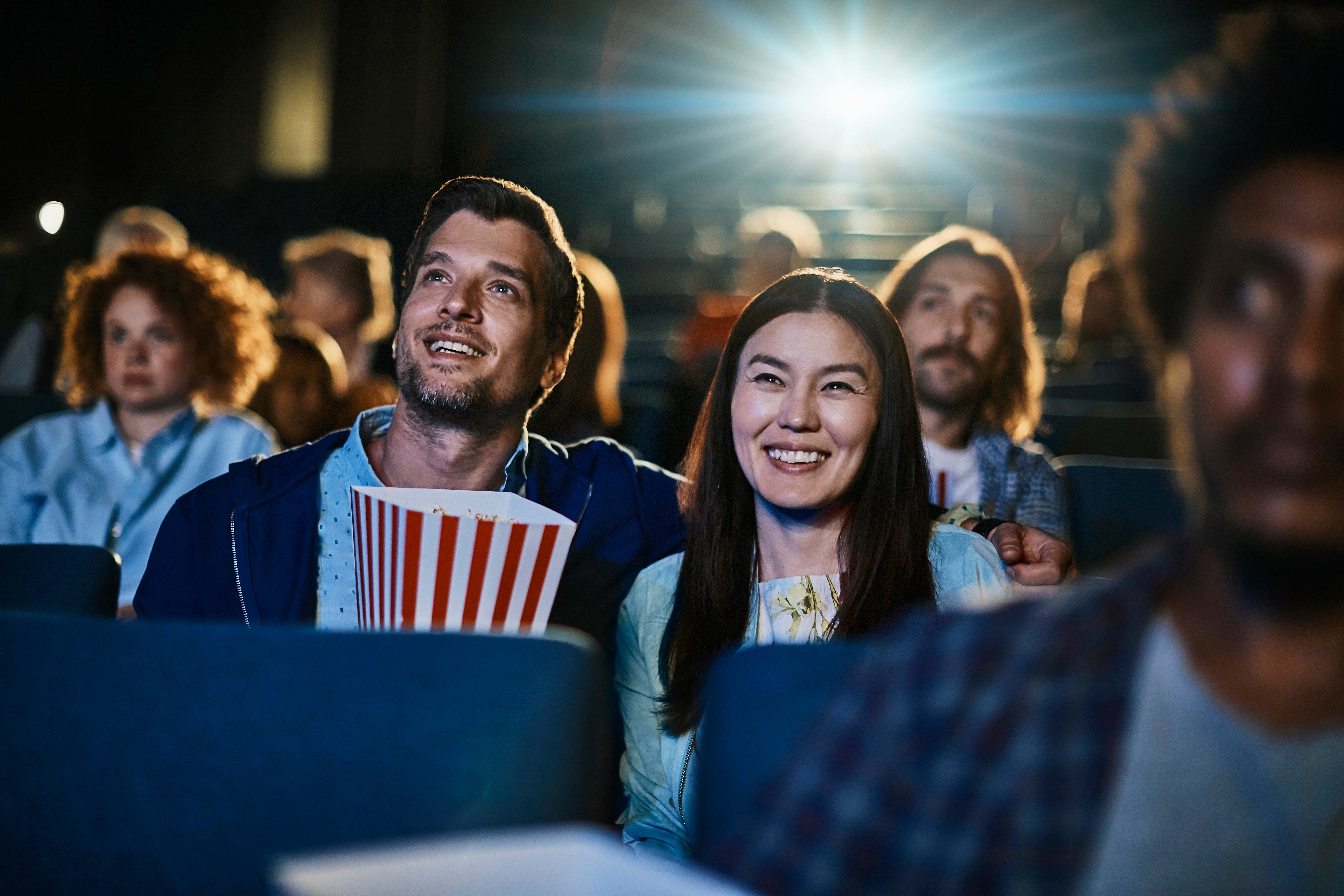 Emotions are key factors in attracting and entertaining cinema audiences. Médiamétrie is conducting in-depth analysis into the emotional experience of viewers and how this affects their appreciation of short and feature length movies. To complement its own research, it has now also enlisted the artificial intelligence technology developed by its partner Datakalab.

The role played by emotions in audience choices

Audiences are seeking an emotional experience when they engage with culture and entertainment. This is particularly true for the cinema. Marine Boulanger, Médiamétrie's Director of Cinema pointed out: “The cinema is a place for emotions. Our research shows that among some 42 million cinemagoers in France in 2018, 3 out of 4 viewed the cinema primarily as a catalyst for emotions.”

When choosing which film to go see, 33% of cinemagoers based their decision on the trailer. To a large extent, the decision of whether or not to go to see the movie was based on the emotional reaction they had to the trailer. Indeed, our emotional impression plays a crucial role in how we remember images that we have seen, how much attention we give to them and finally, the degree of interest we take in them.

Riadh Lebib, Doctor in Neuroscience and Cognitive Designer at SBT|Human(s) Matter, explained: “Emotions are critical in the first phase of the memorisation process. Retention is so much higher where there has been a strong emotional experience in a situation. This is equally true for positive and negative emotions.”

According to Frank Tapiro, Chief Emotional Officer at Datakalab, “Our recall of films viewed at the cinema is the sum of all the emotions aroused.”

Therefore, emotions determine the appreciation and awareness of content and they also trigger action on the part of the viewer: searching for more information, recommending the film, going to see the film, etc. Emotions steer audience choices which are now increasingly complex given the profusion of programming on offer across all screens. There is no shortage of sources of emotions in today’s world, whether these originate from current affairs, culture, or entertainment. To draw in cinemagoers, a trailer has to stand out from these other offerings and the film must reach an audience in order to generate a positive word-of-mouth response. So, it is hardly surprising then that film producers are seeking to constantly improve their understanding of the emotions felt by viewers of trailers and films. Research carried out in this area then guides them on how to readjust certain elements.

Médiamétrie's testing of trailers and film test screenings helps to measure audience emotions in a declarative manner: their intention to go and see a film as well as to recommend it; how much they liked the film in general and its various component scenes; and specifically, what they thought of the casting, characters, acting, sets, and score.

The verbal statement of impressions is complemented by facial expressions. To decode these facial expressions, Médiamétrie now works with Datakalab - a “brain-tech” start-up specialising in quantifying facial reactions through the use of Artificial Intelligence technology.

Datakalab uses Deep Learning methodologies to measure the viewer's attention and emotion. Viewers aged 15 years and older are filmed via the webcam whilst watching a trailer on their computer, or whilst viewing a film at the cinema via cameras positioned on either side of the cinema screen. Naturally, their consent is required, and they are fully aware of their participation in a test; the measurement fully complies with the General Data Protection Regulation.

The videos are transmitted and analysed by Datakalab, before being deleted. Xavier Fischer, CEO of Datakalab explained: “Our researchers have developed an image analysis algorithm that firstly identifies 100 characteristic points on the human face to detect the nose, eyes, and mouth. To do this, it relies on the Datakalab database which consists of hundreds of thousands of images. The more it analyses different images, the more accurate it is at detecting these characteristic points.”

Next, the algorithm measures the viewer's attention, in particular by identifying the direction of their gaze, i.e. looking towards the screen or elsewhere. Finally, involuntary facial microexpressions are observed based on the activation of the 42 facial muscles, and using the classification established by American psychologist Paul Ekman in the 1960s. The seven emotions he identified are: happiness, surprise, fear, anger, contempt, disgust, and sadness. For example, a wrinkled nose evokes disgust; happiness is expressed when the corners of the lips are drawn back and up, as well as by crow's feet around the eyes. Happiness and surprise express a positive perception, whilst the other emotions are associated with impressions that are described as divergent. 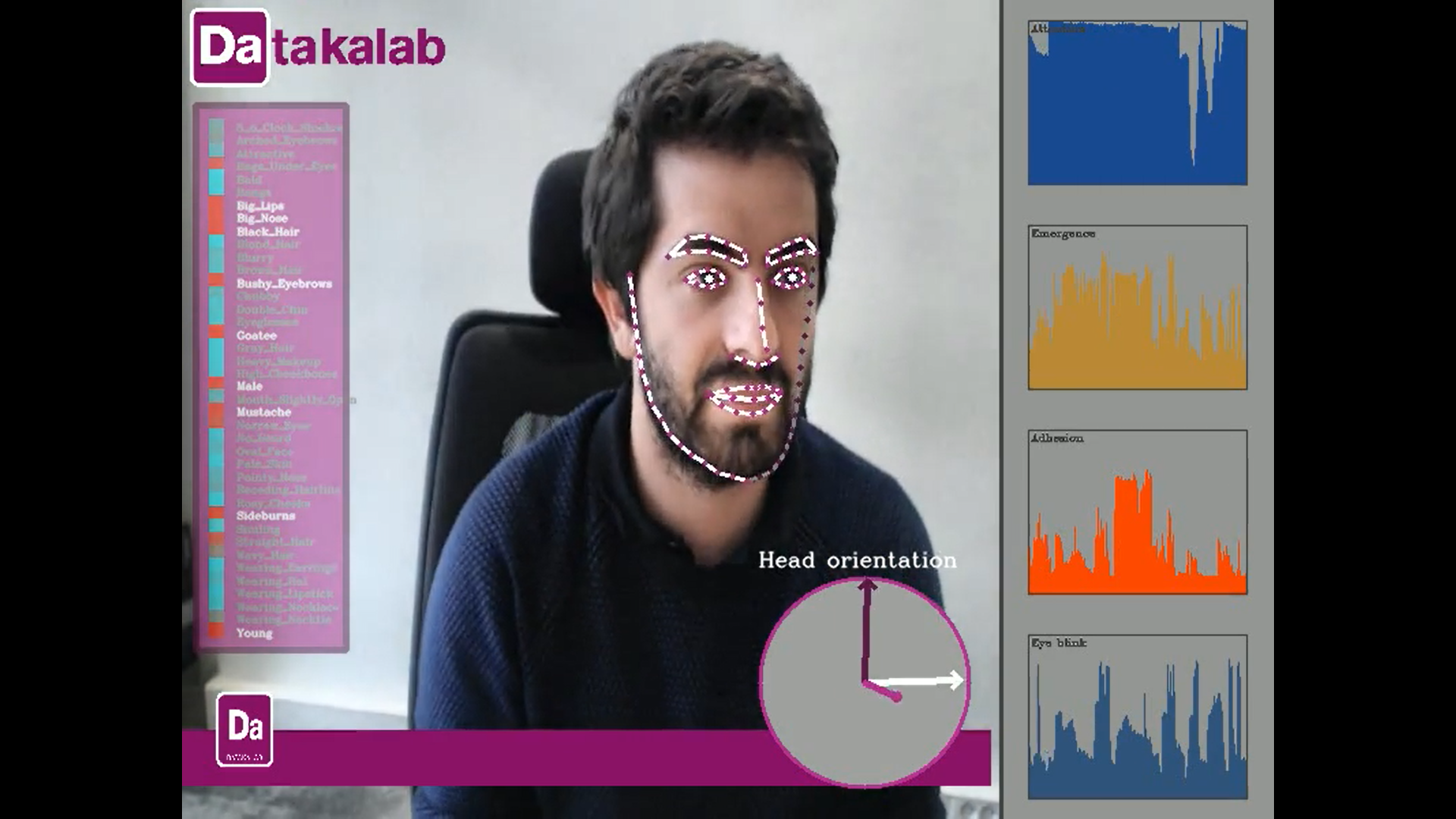 The audience's level of attention and the positive emotion peaks are shown graphically in a second-by-second illustration of the emotions, their type, frequency, intensity, and attention highs. Intense feelings experienced by the viewer during the screening are identified. Médiamétrie and Datakalab have thus defined four key indicators: attention, presence of emotions, positive emotion and divergent emotion.

According to Xavier Fischer: “Human beings have no emotional storage capacity. We cannot say what our past microexpressions were. Our goal is to transform these external emotional signs into data which we can then use.”

When cross-referenced with the data gathered from Médiamétrie's declaration survey, this information confirms the measured emotions vis-à-vis the declared impression. Thus, it is possible to confirm which elements of a film represent its strengths and which are its weaknesses. Riadh Lebib gave this analysis: “Emotion - whether conscious or otherwise - is captured in the moment. The questionnaire collects the experience that a person keeps, their impression.” Therefore, the study provides specific information about the attachment or non-attachment to the characters, favourite scenes, and at the other end of the scale, scenes which cause viewers to switch off, etc. The film’s pace is analysed via the frequency and intensity of emotions.

According to Marine Boulanger: “If the film triggers an emotion, then a viewer engagement towards this content exists. There are no good or bad emotions, the impressions are analysed on a case-by-case basis; the issue arises whenever emotions are absent, whenever the viewer becomes indifferent.”

Since Médiamétrie has 250 film test screenings under its belt, the levels observed can be compared against benchmarks to assess their strength, as well as to estimate the potential in terms of cinema admissions. Marine Boulanger specified: “Measuring emotions represents a new technological tool that is simple and reactive. As an operational tool, it bolsters the expertise of cinema professionals. It helps them to check that a film is conveying perceptions correctly and it assists them to optimise the scenes.” Viewer profiles are gauged on the profiles in the 75 000 Cinéma survey which Médiamétrie conducts annually and which examines and quantifies cinema viewers, their profiles, and how frequently they go to the cinema.

Whilst this technology is particularly suitable for cinema, it could also have applications in other areas; Médiamétrie is currently looking into its potential development in the fields of consumer goods, advertising, TV and video programming.