Digital technology, or the era of accelerated time

Results & Studies
Audience le mag
In profoundly modifying our lifestyles, digital technology has been able to produce the feeling that time is accelerating
Published on 31.05.2016

Quicker access to information, the diversification of media, the enrichment of content and service offerings, the multiplication of demands.

From 36 daily contacts with digital entertainment and media in 2006, according to Médiamétrie's "Media in Life" study, the French population 13 and over have nearly 44 in 2015. Certainly time for sleep is down, a reduction that does not cover the time necessary for all these contacts. How are the effects of digital technology perceived by the public? How do media, in the digital age, affect each person's schedule? 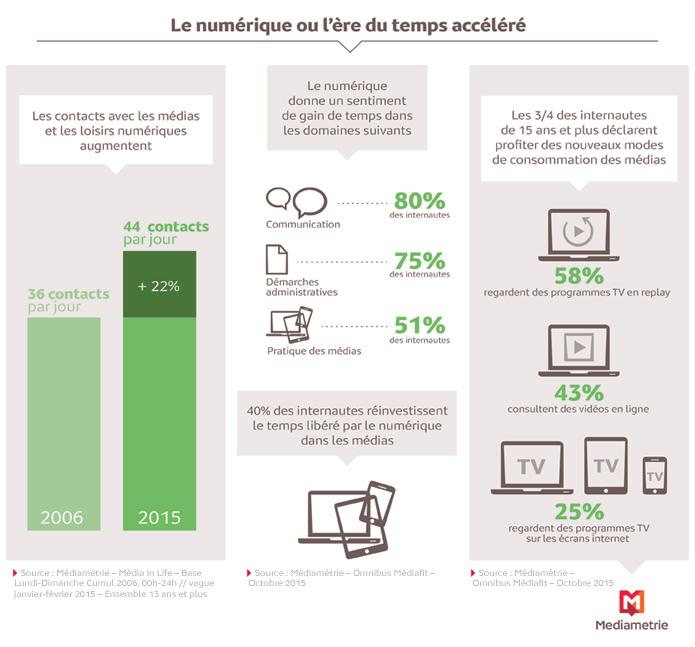 As a day cannot last forever, the profusion of content and service offerings associated with digital technology leads us to ask how schedules are being reorganised, especially as other activities have also grown: contacts with leisure activities have grown from 8.8 in 2006 to 9.1 in 2015, contacts with domestic activities from 7.8 to 8.1 over the same period. Can digital technology save time? Is this free time re-occupied?

For a large majority of individuals (81%), digital technology provides a feeling of saving time. Communication is the primary area where this time savings appears (80%) - with email, SMS and other methods of exchange created by digital technology - followed by administrative tasks (75%). Time savings from media practices comes in third with many respondents sharing this (51%), with more young people and individuals in higher income groups stating they've saved time in this area. More than a simple way to save time, digital technology is further perceived as a source of efficiency in managing one's schedule. Individuals stating they have gained efficiency through digital technology (71%) assert at a rate of 90% they have gained efficiency in 70 activities, and 70% in at least 3 activities.

This freed-up time is largely put back to use, since according to Médiamétrie's Mediafit survey, 77% of those who state they saved time through digital technology devote it to at least 1 activity. This time is dedicated to family and friends (37%), going out (33%) and reading (31%). It is reinvested in media by 40% of respondents. Among those who devote time to at least 1 media or multimedia activity, 90% devote it to the internet, 59% to TV activities and 52% to the press. The internet and screens can help save time... which is then partly reinvested in screens: when waiting, 69% of those surveyed use their mobile or tablet. Nevertheless, 31% claim they do not try to occupy every minute of their time with these screens.

By providing new ways to consult media, digital technology allows for better time management. Three-quarters of web users 15 and over say they take advantage of new media consumption methods. Among them, 58% view TV programmes via catch-up, 43% view videos online and 25% watch TV programmes on their phones, tablets or computers. By allowing viewers freedom from set TV schedules, time-shifted viewing provides them the feeling of better time management. Partly because it is also possible, for 2/3 of those surveyed, to simultaneously watch multiple screens.

Confronted with new practices encouraged by digital technology, audiences nevertheless preserve the feeling they control their time and their schedules. Seven out of ten people interviewed had a positive view of digital technology, considering it a true revolution. Even among the nostalgic 30%, for whom "life was better before", 59% acknowledge the technology allows them to save time.

With excessive content offerings, 3/4 of individuals acknowledge they cannot watch everything. While 58% of those 15 and over watch content while doing something else, so as not to miss anything, multitasking is primarily chosen to save time (64%). So much so that 83% of individuals are not willing to disturb their schedule to view more content, and 70% are not ready to sacrifice other activities (sport, going out). In the digital age, the public insists on keeping its priorities. Sixty-one percent of those surveyed do not feel they are "chasing time" just to watch content. Seventy-two percent believe that digital technology does not impart the feeling of being constantly behind.

Six out of ten people log out for free time

After having shaken up habits, digital technology has now wholly embedded itself in people's lifestyles. Seventy percent feel the internet and screens have not imposed an inappropriate rhythm on them; everyone makes some adjustments and changes their schedules accordingly. As a way to save time and better manage it, digital technology also offers new ways to consume content.

In this regard, the occasional choice to disconnect is significant. Six out of ten people interviewed declare they disconnect to give themselves free time. Among them, 56% do so to take time to enjoy their activities more, and 35% to go at their own pace, even if it means arbitrating between choices. For the 39% of individuals who never disconnect, nearly half (49%) believe that the pace brought about by digital technology suits them; similarly 23% feel the need to be connected constantly, and 28% consider that this is how to live in our age. Whatever the choices, a certainty appears just when time seems to be accelerating: people will not be forced into any one else’s pace!