Results & Studies
Press release
The new challenges of an innovative media
Published on 23.01.2020 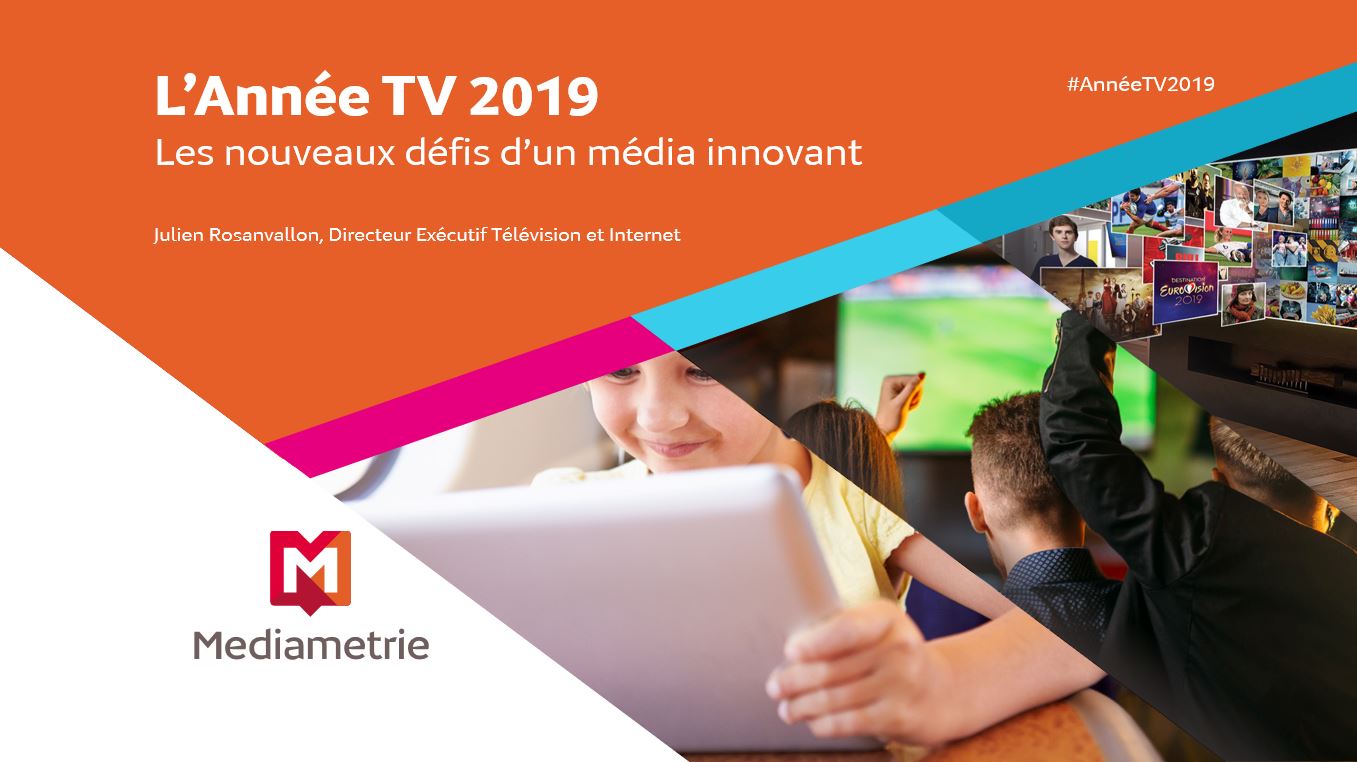 Television in France is still at a high level of consumption, with a strong prime time and often gathering the family in front of the TV set for major events or family programmes. Television is nevertheless innovating in accordance to its mutating environment: preview, catch-up, online and on-demand viewing are increasing. SVOD is even inspired by the television, featuring a prime-time and now offering weekly schedules. Out-of-home audience will soon by measured.

Identity and powerful features of TV

In 2019, daily TV viewing time remained high: 3hrs 40mins on average each day per person across all households, all devices, and for live broadcasts, time-shifted and catch-up viewing. Nevertheless, that figure had declined by 6 minutes compared with 2018, which was due in particular to fewer big news stories and an especially mild winter. It was also recorded in a context where TV viewing time was decreasing around the world. Not to mention the new options available to the viewer such as SVoD, which is definitely becoming an established part of France’s audio-visual landscape.
In the course of 2019, television reasserted its power by playing to the strengths of its core identity:

• the television set : sat at the heart of households, French people gather around the TV for an average of 4hrs and 7mins every day, primarily watching television channels (3hrs 30mins), but also playing games, watching films on a VoD/SVoD service, or even using ancillary set top box and online services.

• unmissable viewing during the classic prime time peak audience at 9:30pm that unites more than 23 million viewers each evening. This is television’s true firepower.

• programming that brings audiences together, such as sporting competitions (39.5 million TV viewers came into contact* with at least one match played by the French women's football team during the World Cup), or the news, for instance: 35 million viewers tuned in to watch the aftermath of the fire at Notre Dame Cathedral in Paris. This year’s top entertainment shows among young people included The Masked Singer aired on TF1 which captured nearly 45% audience share in the 15 to 34 year old category, and Eurovision (France 2), a show whose audience has been growing younger over the years. Some “classic” films are also part of television’s DNA: regularly featured in the schedules, they still unite audiences today. Finally, one film première that was broadcast really drew in the crowds: The Lion King cartoon aired unencrypted for the first time on M6 and was watched by 4.7 million viewers of all ages.

On March 30, 2020, the audience for TV programmes that are viewed outside the home will be measured across all devices (TV, computer, smartphone and tablet): in holiday or second homes, hotels, airports, public places, and in mobility. These out of home extra audiences will represent about 5% additional audience over and above the TV watched at home.

“Television audience measurement is set to undergo some major change just a few weeks from now when TV programmes viewed outside the home will also be included in Médiamat. We have always developed measures in tandem with market stakeholders which have accompanied the transformation in television consumption. This digital-driven evolution has gathered even greater pace in recent years," stated Julien Rosanvallon, Médiamétrie’s Executive Director of Digital and TV.

Watch shows on air, or else after or even before they are broadcast

At the same time, television is constantly evolving with innovative offerings, services and programming that seek to reflect the changes in viewer behaviours as closely as possible.
This explains why catch-up services, which are increasingly available for up to 28 days after the live broadcast, are still finding new fans. In 2019, 7.8 million French people used a catch-up service to watch programmes, i.e. 13% more than 2 years ago. Fiction was the leading genre for this viewing practice.
Online viewing is also an integral part of the evolution in TV consumption: each day, 4.3 million French people watch programmes on a computer, tablet or smartphone for an average time of 1hr and 58 mins, i.e. an increase of 55% in the last year.
Another service which is gaining in popularity and broadening its offering is Preview: in November 2019, more than 2 million TV viewers watched a programme which the channels made available prior to airing it live. In some cases, this alternative mode of viewing mode has given a real boost to the ratings, for example the series Les Sauvages on Canal+ achieved 54% of its audience thanks to preview.

Finally, nowadays, TV viewers can access TV content via on-demand, as in the case of SKAM, a France Télévisions series that is only available on the France.TV Slash on-demand platform.

SVoD is inspired by TV

On the other hand, beyond the new ways to watch offered by SVoD, television is all the richer for it: the fictional genre is growing (an extra 750 hours of fiction in 2019), and recorded some real hits among French series which occupied 53% of the top prime time slots in 2019 compared to 13% in 2009. One example was Bazar de la Charité, a TF1-Netflix co-production that aired first on TF1 and then on Netflix and which won universal acclaim with 7.8 million viewers on average tuning into each episode on TF1.

Worldwide television programmes and practices influenced by the health crisis