France Esports, an association bringing together the major parties in esports, has presented its first barometer conducted by Médiamétrie with 4,000 web users aged 15 and over. This barometer was presented to Mounir Mahjoubi, Secretary of State in charge of Digital under the Prime Minister.

How popular are esports in France? Who are the consumers, and what are their typical uses and practices? Which games are the most participated in and streamed?

Esports users, who are you ?

The number of French esports consumers - having already watched esports on the internet, on television or at a live event - is placed at 5.5 million, or 12%. Alongside the spectators are the players: in July 2018, there were just over 2 million of them, spread among amateur esports players and recreational esports players.

When it comes to gender, men represent 72% and women 28%. Surprising? Not really for Stéphan Euthine, France Esports President: “The low representation of women comes as no surprise and further confirms the importance of developing diversity within the sector, an essential challenge for our association.”

Contrary to popular opinion, watching esports is not reserved for the youngest generation: in fact 35-49 year olds make up the highest age bracket of consumers, representing 1/3 of viewers, compared with around a quarter for 15-24 and 25-34 year olds. Another surprising fact: the share of people in the upper SPC that represent almost half of viewers (48%).

Are we seeing more players or spectators ?

In both cases, we find similarities. Among those preferring to watch esports, it is above all to admire the skills of the players (42%), as form of distraction and entertainment (38%) and to learn the strategies and techniques of the game. For players, enjoyment is undeniably the main motivation (75%).

In the top 3 competitions most followed by amateurs, we find battle arenas, like for example LoL, followed by close to 6 amateurs in 10. The podium is completed by sports games - with Fifa in the lead - and shooting games, dominated by Call of Duty, with 40% of esports amateurs showing an interest.

In a different order, these 3 games are also the more popular with those participating in esports.

Those who practice esports are not JUST playing, they are also engaging in physical and cultural activities, and even more than the average French web user! 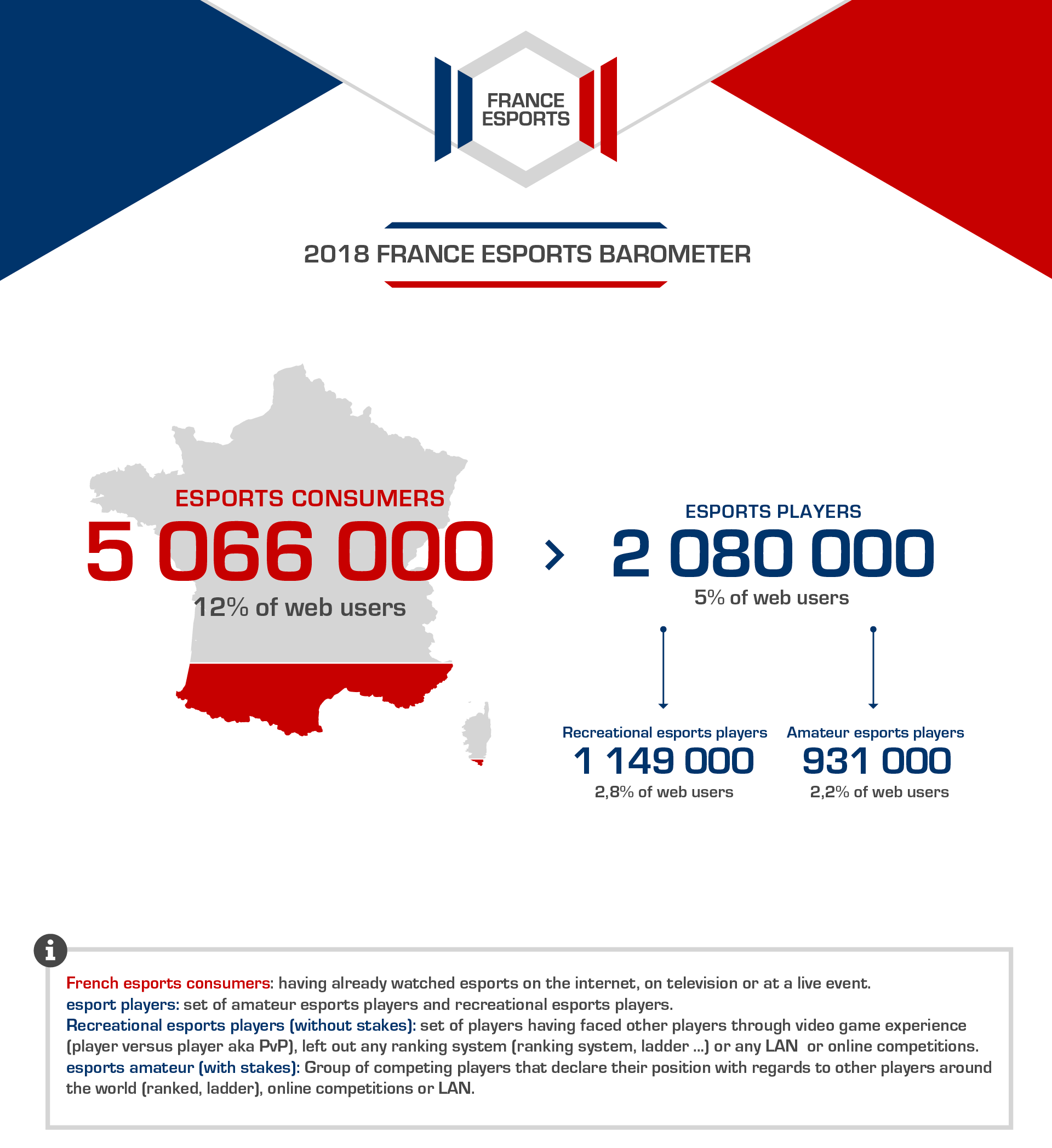 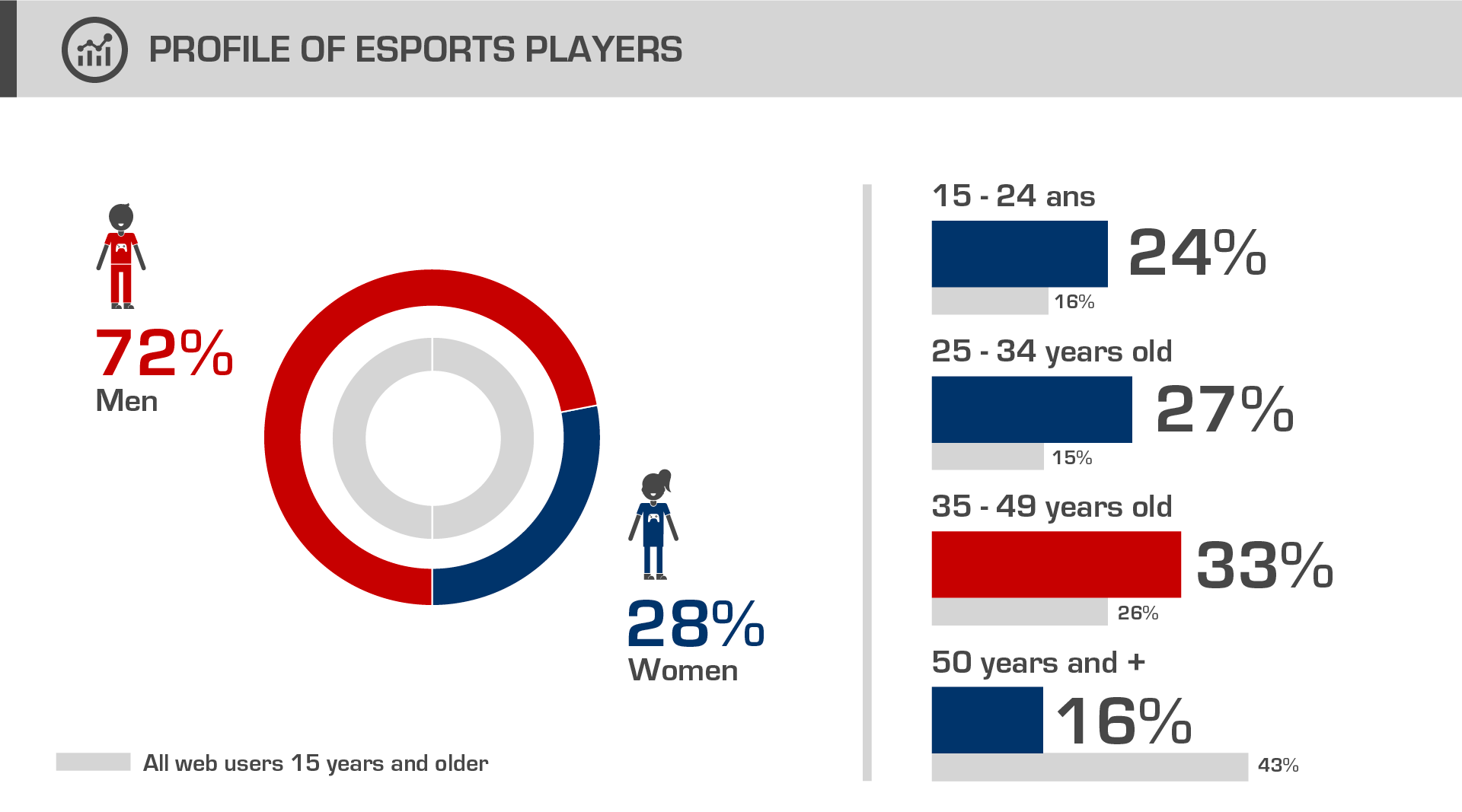 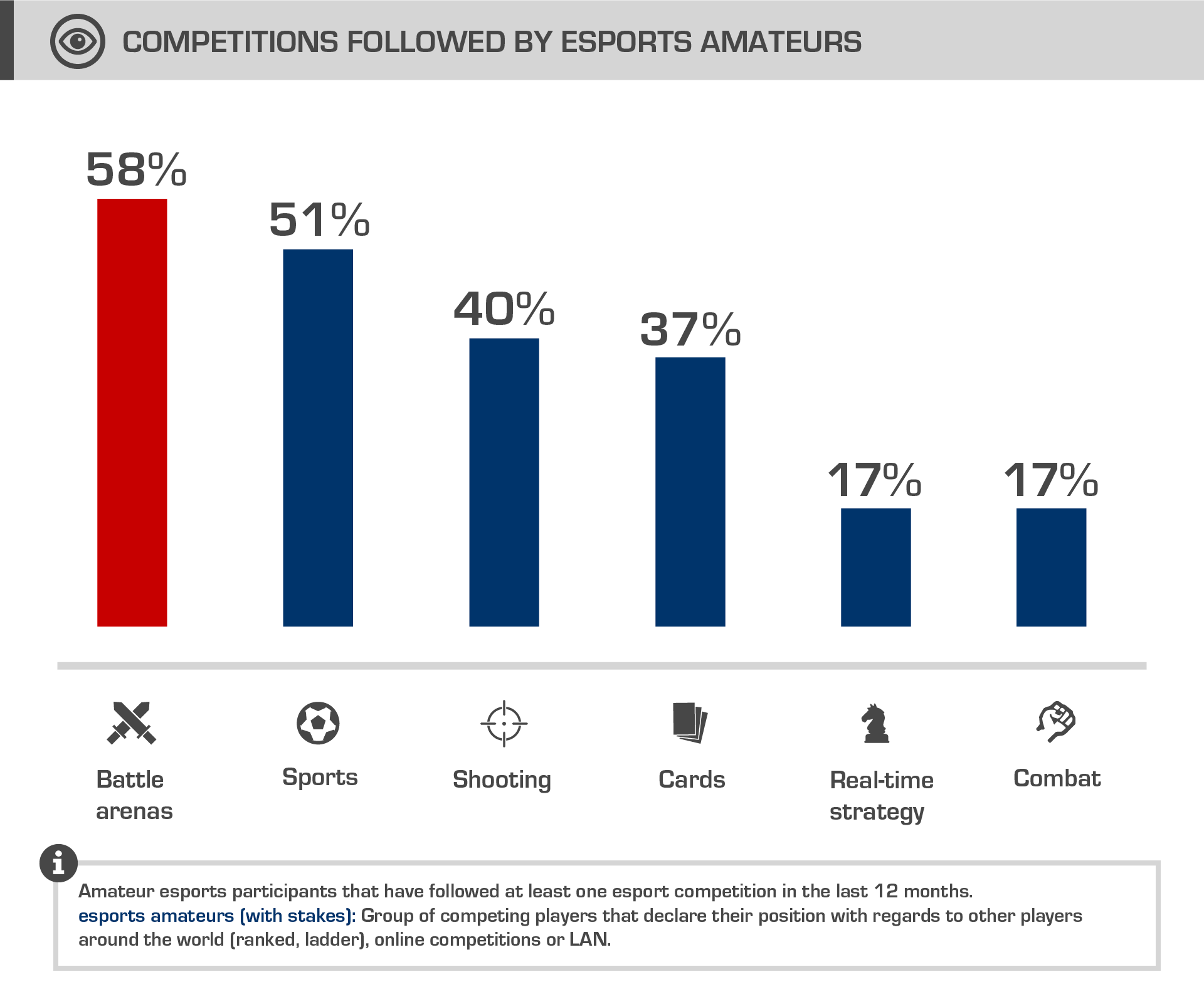 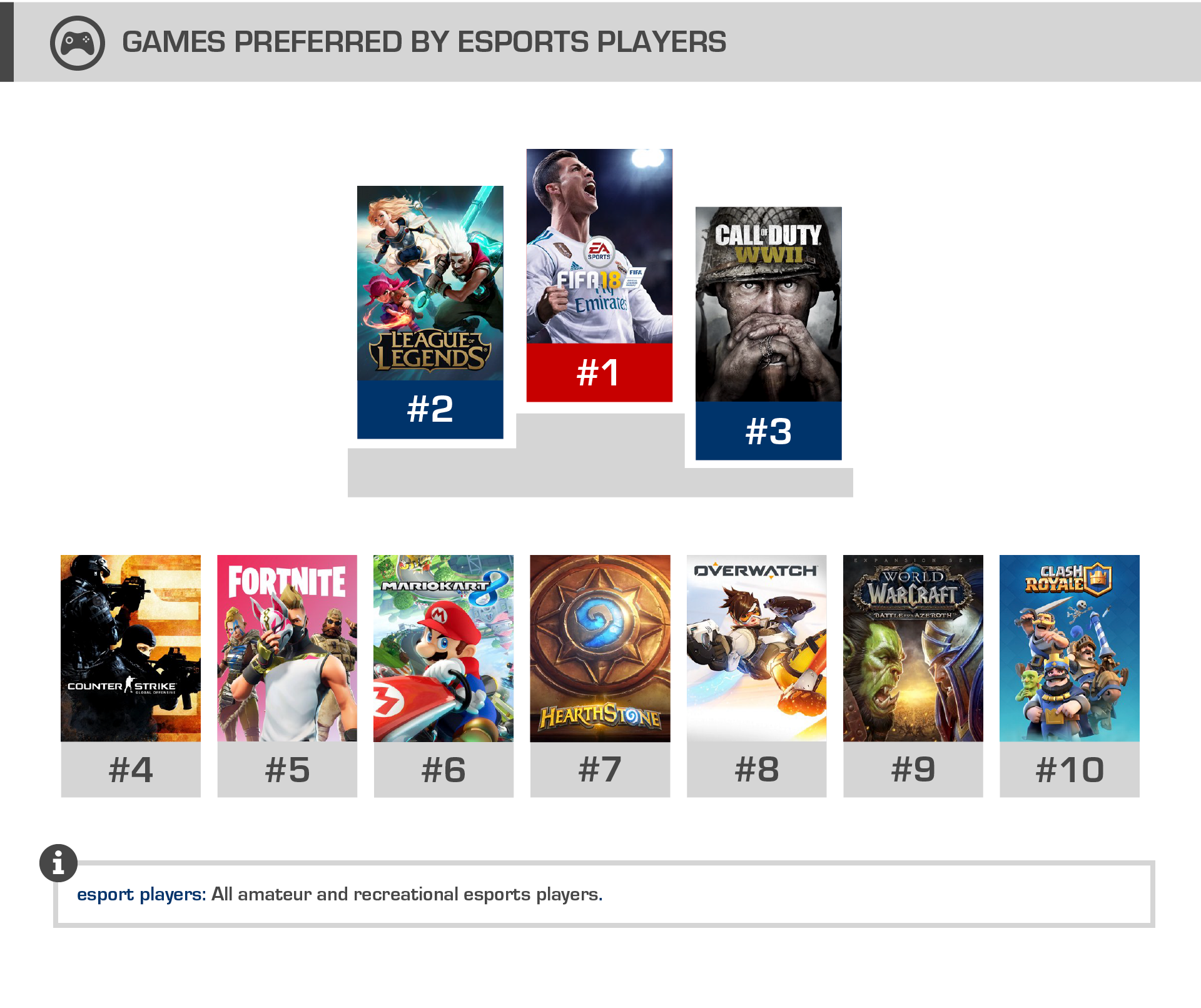 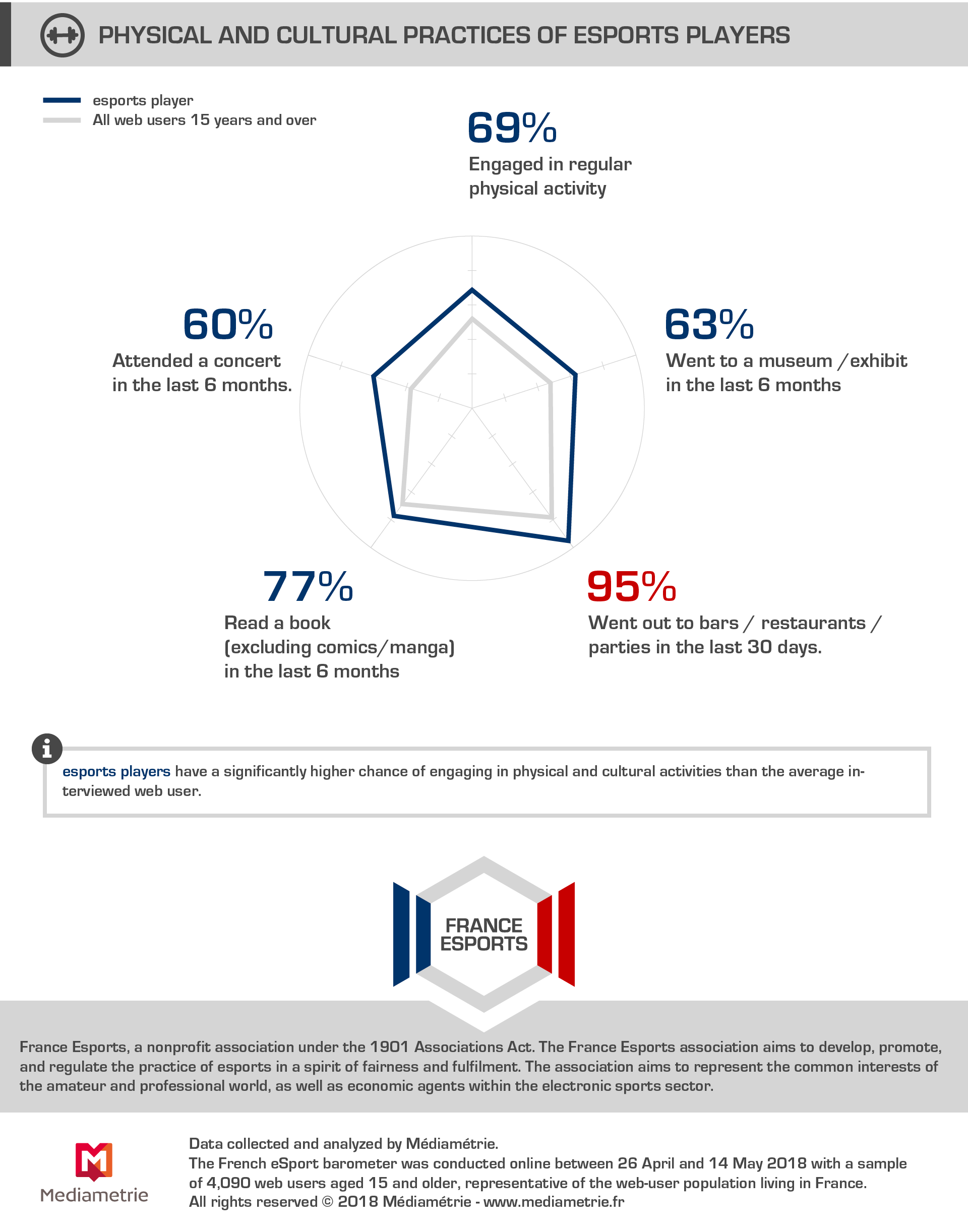